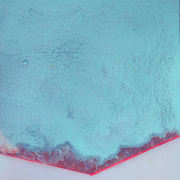 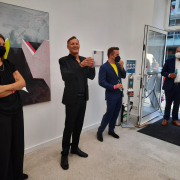 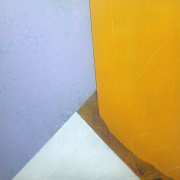 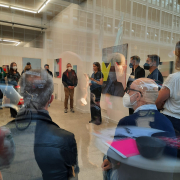 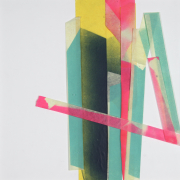 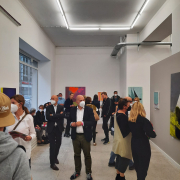 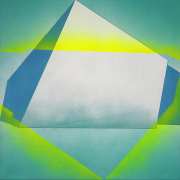 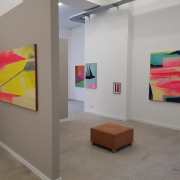 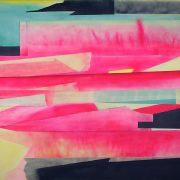 Just in time for the start of the 2021/22 season and Art Week Berlin, nüüd.berlin opens its new gallery space in Berlin-Mitte with paintings and works on paper by Marco Kaufmann.

After training as a graphic designer, the artist, who was born in 1975 in Vorpommern and lives in Berlin, graduated in free art (painting and photography) at the Berlin-Weißensee Art Academy. Inspired by the city, the country, his travels and photographs, he translates what he feels and thinks in various techniques as a subjective variant of reality – he paints, casts, sprays, glues.

Marco Kaufmann’s current works are the result of a certain phase in his creative life. A pause, apparently, filled with sadness. The world had also come to a standstill.  Works that at the same time reflect his great creative power and zest for life in powerful and clear images. In defiance of circumstances and fate.

The adhesive strips he uses to mark the clear edges and colourful horizons in his paintings have wandered. To finally take on a life of their own and become a work of art themselves. Or, to play with the shapes they have left behind. Negative forms that offer new perspectives. To look into new worlds and point elsewhere. The artist gives direction in the dance with his tools. He paints paths, bridges, buildings and landscapes and then contrasts them with lack of direction. Fogged destinations, buried paths.

Completion happens between the viewer’s gaze and the image in space. In the moment of viewing. “After all, it is all just a foreshadowing.” Says Pina Bausch. …. “To make something very definite foreboding.”

In earlier works, Marco Kaufmann poured the paint until it reached the limit of the painter’s masking tape, which was meant to hold the line as if on a wall. In this process, the paint had the opportunity to flow under the tape and deposit its sediments there. Once this boundary was detached, the unusually lively paint residues were thus able to flourish into new forms.

As in the painting “Anderswo”, where the view of a deep, vivid turquoise invites us to gaze into the vastness of the sea. The clear edge of neon pink simultaneously forbids being overwhelmed. It sets the horizon that protects and limits. And as in the backward movement of the wave, there remains a glimpse into the depths of the sea, into the sediment that has always been there, now suddenly visible.

The artist’s architectural works always show an elsewhere. Something we do not yet know or where we have not yet been. Another place or simply another way of seeing. Under the surface of a dark purple or black, pink shimmers. Earlier images are palpable in the background and give the paintings their great depth.

Currently, it seems as if the spray can creates a more relentless edge. As if the forms are simplifying. A blue-grey line, as in the large “Auf bald, Wind”, that stretches between areas of zinc yellow and an explosion of neon pink. Which makes the neon seem even more gaudy. It separates like a mirror that shows the halves what they have become. It says there is another way, another direction. Where the viewer is allowed to linger, to witness the painter’s gaze and contemplate his view of the world. At the same time, the spray can creates the mist. There are hints in the older works of what is now unleashed in the neon colours. The approach wins out over the concrete.

The gaze itself is elsewhere. Possibly outside Marco Kaufmann’s everyday gaze. Elsewhere, finally, is the creative process itself, to which the painter surrenders again and again.

The result of which conveys a new lightness. A power that veils its healing process and yet always foreshadows it in the background. Which approaches photography again, which Marco Kaufmann also practices artistically. In which his gaze expresses itself just as skilfully as in painting.

His gaze that makes it possible to sense that the elsewhere is simultaneously here and there in the pictures. Without any pause.

3D-Tour of the exhibition:

More information about Marco Kaufmann here and at the artist’s website.