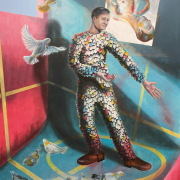 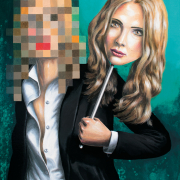 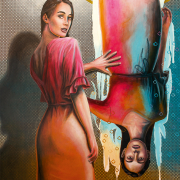 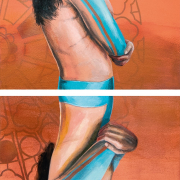 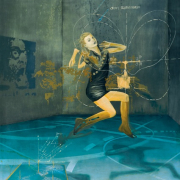 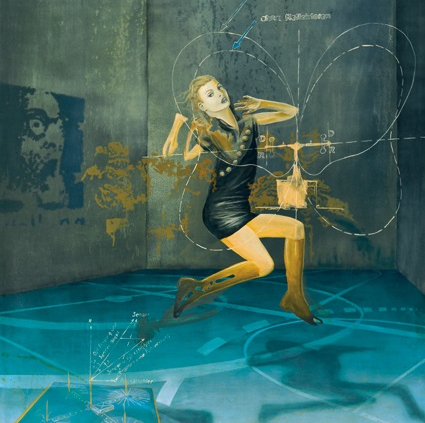 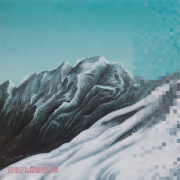 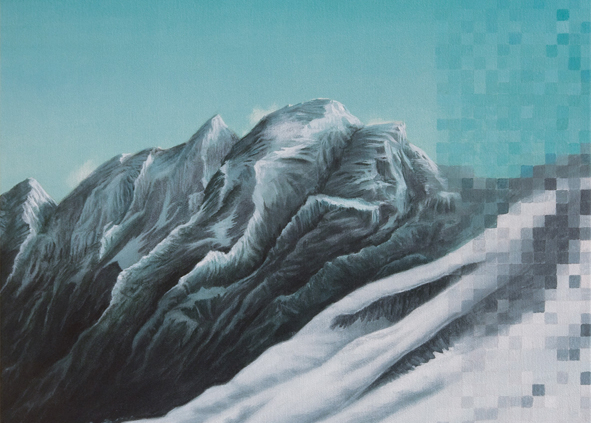 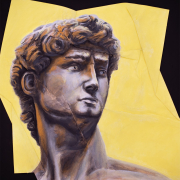 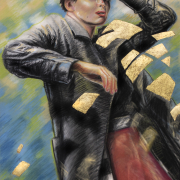 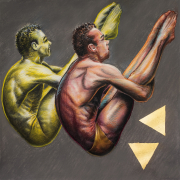 In the exhibition SINNSTIFTER we are showing works by the Stuttgart-based artist Axel Teichmann, whose art focuses on people. The artist deals with identity, technology, digitalisation and social change. The exhibition features paintings, pastels on paper and sculptures made of acrylic glass, which show a more abstract and thus further component in Teichmann’s figurative-realistic art.

In his paintings and sculptures, Axel Teichmann (* 1974) focuses on people. In doing so, he asks questions about change and renewal of the human self-image and its identification through an increasingly changing environment. Axel Teichmann’s paintings are extremely finely composed and concentrated in their form and colour composition. The paintings often depict a single figure, into which the viewer automatically empathises. The recipient thus becomes part of the effect of the art.

It is similar with the acrylic glass sculptures: the transparent acrylic glass elements reflect the viewer as well as the entire environment. A pixelated figure can even be seen several times and in altered form from different angles. In this way, the artist manages to go far beyond a mere representation and presentation of painterly, sculptural-technical precision and to evoke a reflection and statement in the visitor.

The painting “Sinnstifter”, which gives the exhibition its title, shows a man in a humorous harlequin costume feeding pigeons, the meaningfulness of which is not apparent. The man, now turned 180 degrees, is reflected naked in the background. On the one hand, the protagonist is reflected in this picture, but at the same time, under the theme of the search for identity, the viewer of the picture is also reflected. Such multiple – digital – identities of the same person are not uncommon in today’s social media, often serving only capitalist self-marketing. Naked, however, all people are the same.

The painting “The Silent Me” shows a woman with a red dress standing in front of a wallpapered wall. As the wallpaper is partly torn off, a white wall becomes visible on which the same figure suddenly appears again – but standing on her head. The woman seems surprised at her “mirror image”. Likewise, the viewer is confronted with the question of reality and image, of truth and appearance. Digital image generation, which is transferred to painting here, makes it much easier to visually support and reinforce statements. Only the credible conveyance of truth in image and text content can ultimately transport content at all.

The surreal-looking reflections of the figures occur frequently in Teichmann’s work and he even dedicates an entire series to this form of representation under the title “Trockenschwimmer / Dry Swimmers”. Reflections have been a strong theme in art for centuries and the references to the surrealist masters, such as René Magritte or the founder of metaphysical art, Giorgio de Chirico, are obvious. Chirico in particular was concerned with the environment changed by man, which in turn affects society – a subject that today seems more topical and urgent than ever.

In many of his paintings and sculptures, the artist uses gold leaf as a symbol of high value. Axel Teichmann thus presents art as valuable, which in its authenticity and tradition makes indispensable contributions to relevant social issues.

For the artist it is important that the “viewer becomes part of the work of art” and thus enters into a dialogue with the figure in the picture. He identifies with what he sees. In this way, art never remains distant and unapproachable, but the viewer asks himself questions about his own identity, meaningfulness and openness.