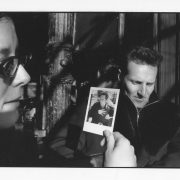 Henner Merle and photographer Hendrik Rauch were introduced to New York photographer Michael Ackerman in January of 1998. They were very impressed with his work and wanted to put it on display in Germany. Shortly thereafter they curated an exhibit at the ZFF Zentrum für Fotographie (Center for Photography).

Michael Ackerman, born 1967 in Tel Aviv, calls himself a street and documentary photographer. Since 1990 he’s been exploring his surroundings in New York. He has captured the disappearing street life of Times Square and just as impressively the various religions in Brooklyn, night clubs and the banks alone the city’s waterside.

In 1995 an extensive work about Benares, India, the oldest continuously inhabited city on Earth came to life. These photos often have an unbearable intensity like when a gigantic skein of vultures devours the carcass of a cow or a small child curiously eyeing a dead body floating past.

The critic Vince Aletti chracterized Ackermans work in the magazine the Village Voice as “brutal, dark and brilliant…”, and called him “… one of the new classics of the genre.”

Ackermann applies a variety of different formats. Small picture, panorama and 6×6 pictures unify together to form a powerful mosaic. Many of his square pictures originate with his almost legendary “Diana”, a Chinese plastic camera that goes for $20. With its strong vignetting the camera makes it possible to produce very unique photographs.

Ackerman says his childhood memories from the Yom-Kippur War made a heavy impact. At the young age of seven he moved to New York. A friend of his turned him onto photography and he’s been fascinated by it ever sense. He even dropped out of college in order to completely dedicate himself to his medium.

In 1997 Ackerman was awarded with the Infinity Award – Young Photographer from the International Center of Photography (ICP). In the same year he was called to the renowned World Press Master Class Rotterdam.

The exhibition showed pictures from 1990 – 1997 of New York, Benares and Cabbagetown, a dreary and inconsolable suburb of Atlanta where an AIDS infected musician and his surroundings were portrayed.