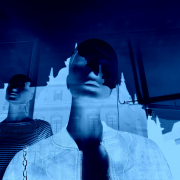 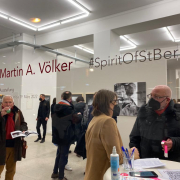 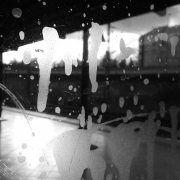 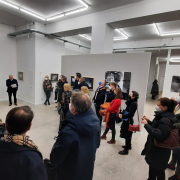 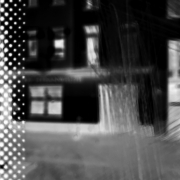 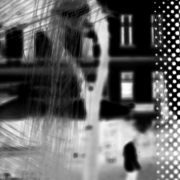 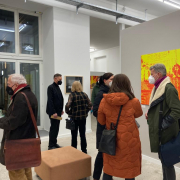 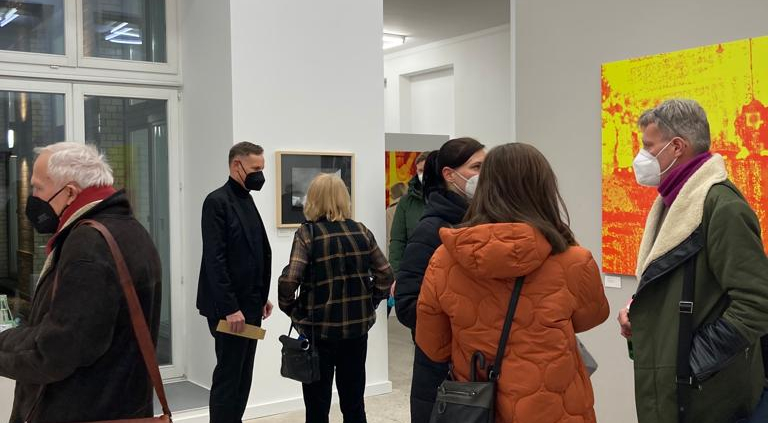 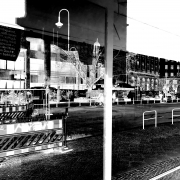 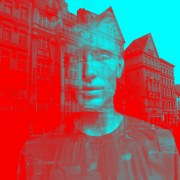 The photo exhibition at the nüüd.berlin gallery shows the city of Berlin oscillating between the melancholy of everyday life and the departure into the dreamlike: the street photography of Martin A. Völker presents new urban perspectives and surprises with unusual insights and vistas.

The Corona pandemic led to the photographer’s intensive preoccupation with unusual aspects of urban existence. It is about loneliness, longings, light and shadow worlds of Berlin.

Railway stations, shopping centres and street situations in black and white characterise Martin A. Völker’s photographic works. Pulsating, earthy life with its many downsides. The title of the exhibition #SpiritOfStBerlin refers to the Spirit of St. Louis aeroplane in which Charles Lindbergh was the first person to cross the Atlantic in a solo flight on 20 May 1927. Berlin is an ocean in itself, full of loneliness, with dangerous currents, but also with wonderful islands, sun games and freedom. This is exactly what the photographs by Martin A. Völker reflect.

The Corona pandemic brought about a serious change in the artistic approach to the urban environment. The demonic, end-of-time darkening of the general mindset led Martin A. Völker to a photographic inversion of the existing and to a focus on extreme city views. The aspect of urban reconciliation and healing of city dwellers, which guides the visitor through three pre-pandemic series, returns in two further, pandemically inspired sub-series: Darkness is followed by light. But there are different light conditions with a new colourfulness that deviate from the light status before the darkness: Let it be different, let it be diverse. A photographic world is going down, and new worlds with new icons are coming up.

The Ring and the Cross

The Ringbahn is the socio-cultural bloodstream of Berlin. The city can be experienced here with its hyperactivity, but also in its emanating melancholy. Wear and tear, lethargy and emptiness are the accompanying phenomena of the urban pulse. Social climbers and the opposite, perceived winners and losers meet. Paths cross and intersect. For some, the daily journey becomes a crossroads. Who is happy and why? What is urban happiness? Is redemption possible in Berlin?

Berlin was and is a place of longing. Longing draws people to the city and drives them away again, without the hope of finding personal happiness there. Individual places and perspectives, dreamlike deformed reflections in puddles or panes of glass remind us of deep-seated feelings, give us a glimpse of secret desires. As large and impersonal as the city sometimes seems, an inhospitable backyard can seem so homely, simply because it brings back memories of childhood football games.

People who have moved to Berlin or live far away think that Berlin is at its worst in the dark season. It is true that the city shows its sublime side in the sunlight. Berlin becomes monumental, surrounding itself with the aura of the supernatural. Everything seems possible again. The city is full of energy, and it passes on the power to its inhabitants. You can feel small and lost in Berlin, but also superhumanly strong and free and still connected to everything.

The events of the pandemic led Martin A. Völker to a more radical photographic approach to reality: to the loss of clear vision, to the visual destruction of objects, to blackened spaces. The new inverted gaze illuminates and skeletizes. It reveals hitherto hidden dimensions and perspectives and leads back, as it were, to the shell of conditions in order to prepare a reconstruction of what has been from the ground up.

In the pandemic, normality collapsed. Artistically, Martin A. Völker, everything familiar is lost in the abstract. Abstraction surrounds us with strangeness. It binds our gaze to those details to which we become newly attentive after the loss of familiar things. Edges, contours and fragments of reality come into focus. Finally, the colourful chaos of fragments and scraps gives birth to the new. New icons of a new, diverse reality.

3D-tour of the exhibition:

Literary scholar Dr Roland Jerzewski will speak at the opening.

Martin A. Völker reads from his short stories and songs by Jana Berwig.