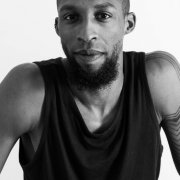 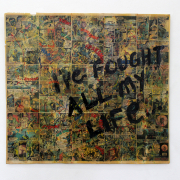 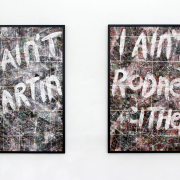 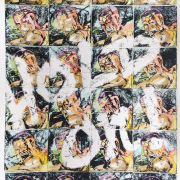 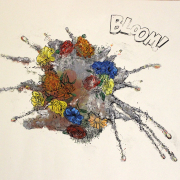 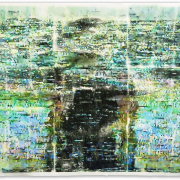 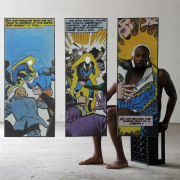 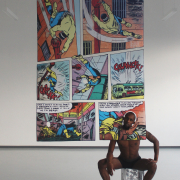 Philip Crawford (b. 1988) is a US-American artist based in Berlin and Philadelphia. His interdisciplinary studio practice includes critical essays, works on paper, video, sculpture, and installation. Philip holds a B.A. in History from Stanford University and is an MFA candidate at the Tyler School of Art and Architecture.

Since 2013, the conversation around policing in America has taken on new life, fueled largely by the proliferation of images and videos of police-involved shootings. Overwhelmingly black and male, the victims of police violence are depicted in these images, their bodies sprawling and limp, or stricken in the throes of life and death struggles–then and broadcast widely.

These politically charged images have served to mobilize activists in movements like BlackLivesMatter, the most extensive grassroots struggle associated with the Black Radical Tradition in recent years. These victims–or more specifically, their images–are held up as heroes and martyrs at once, and their bodies-as-images called upon to serve the cause. But the paradox of heroism in the public sphere–the so called hero-villain paradox–has left the victims of police violence open to a secondary assault. Circulating alongside these quotidian images is a pointed critique of the situations surrounding their lives in an attempt to legitimize their deaths at the hands of the State and obscure the persistent, systemic violence of policing.

For many there is no question to the nature of policing as a primary channel of officially sanctioned, racialized violence. Perhaps the perceived ambiguity attached to these images comes precisely from their flatness: a flatness which not only masks the institutional machinery behind each death, but contributes to their symbolic utility. They serve not to create heroes or villains but icons. It is flatness which leaves these victimized black bodies-as-images prey to appropriation, exchange, speculation, and manipulation and prevents their post-mortem embodiment of either the victim-as-hero or victim-as-villain.

This series is, in part, an act of witnessing.

My Noose Around That Pretty’s Neck

In this series of works Philip Crawford attempts to reconcile the work and life of artist Matt Baker (1921-1959) with the sometimes deadly contemporary perception of black men as criminals and sexual aggressors. Matt Baker is often considered to be the first African American comic book artist. But more than his position among the ranks of the heroic Firsts in the black community, Baker is known best for his unique talent as a “good girl” artist. His pin-up styled comic book heroines captivated the imaginations and aroused the libidos of the predominantly white male readership targeted by early comic book publishers.

To be certain, there is an uncomfortable and undeniable irony in Baker’s position. During Baker’s life there were almost 400 reported cases of black people put to death by white mobs, a figure which only includes cases that resulted in the victim’s death and were publicly recorded by the press. This number pales in comparison to the estimated 3,446 black people lynched between 1882 and 1968 for crimes ranging from homicide to “insulting women.” Alleged rape of white women became a particularly powerful justification for mob violence, building on existing stereotypes about the biological inferiority and voracious sexual appetites of black men.

How should we understand the heroism of a black man whose work is predicated on providing provocative images of white women during a historical period when he could have been beaten, maimed or lynched for simply speaking to them? Contextualizing Matt Baker’s work in the formulaic wish-fulfillment function of comic books provides a useful lens for decoding the narratives which led to thousands of lynchings across the country and continue to hyper-sexualize and dehumanize black men. Within this context Baker’s female heroines may serve as apt surrogates for the similarly objectified black male bodies.

Central to all heroic tales is an origin story describing the hero’s background and source of his or her unusual power. Almost invariably, these tales recount an extraordinarily dangerous event, and one that threatens to destroy the character by either physically or mentally incapacitating them. Planets crumble. Fatal diseases creep through enfeebled bodies. Radioactive spiders bite. Experiments go awry. Parents are murdered and families torn apart. It is in the midst of this mortal danger that the hero is birthed…

Layered on top of these pages chosen for this series are phrases excerpted from the comics themselves. These texts highlight a certain violence, both physical and psychological, in the transition from black boyhood to manhood. These are knee-scrape lessons, hard-won realizations covered in dry scabs, warnings shouted after you on the way to meet friends, bits of adult conversation overheard during long Sunday dinners and settling deep in your psyche.